My Vietnam trip by train

If I had to rank my 10 craziest cities I visited, Hanoi for sure would be in the top 3. This place is something else. 8 million people and i would say about 12 million motorcyles and/or scooters. You don't want to walk down the street with your eyes on your cellphone. Trust me, if there is one thing I learned while in Hanoi (as well as in Ho-Chi Minh city) watch every step you take in the streets. Not because there might be some unfriendly guys robbing you - no, but there is traffic coming from pretty much everywhere.

After a long trip to Vietnam this whole traffic thing kind of pissed me of - but already on the second day I absolutely loved it. I caught myself smiling, watching the hustle and bustle in the streets for several minutes. This is so not Europe - this is so Asia.

what to see in hanoi

I think I spent about 3-4 days in Hanoi and before I started my trip through Vietnam. Non of these days was boring - the capital city has a lot to offer. First I went to the Ho Chi Minh Mausoleum. For those of you who don't know, Ho Chi Minh was the Prime Minister and President of Vietnam between 1945 and 1969 and is honored like a god in Vietnam. That's why they even changed the name of the city Saigon into Ho Chi Minh City back in 1979.

The Mausoleum is located directly in the center of Hanoi. Surrounded by huge park and gardens you find a gigantic building. which is home of the tomb of the founder of modern Vietnam. Guarded by white dressed soldiers the place has  something majestic. Something you don't want to miss when in Vietnam.

Next stop - Train Street. For sure something you want to see. There are 2 sections of Hanoi Train Street where you can watch the train pass. You’ll get the same experience in both so just take the nearest from your accommodation. There is Lê Duẩn which is further out of town and the old quarter section which I did. What shell I say it’s a train track in between houses - but still it is some kind of cool and weird. For some cool pictures you might want to be there early, it gets pretty crowded at noon and in the afternoon. 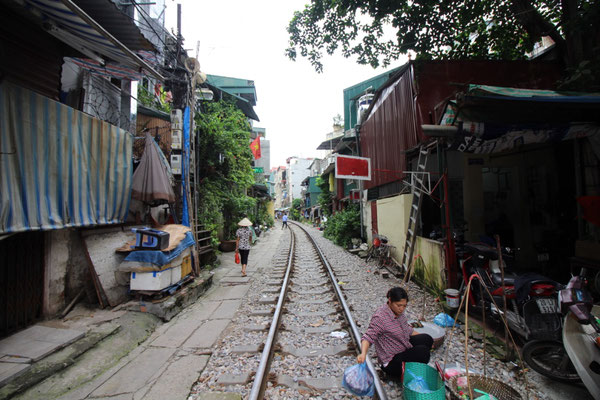 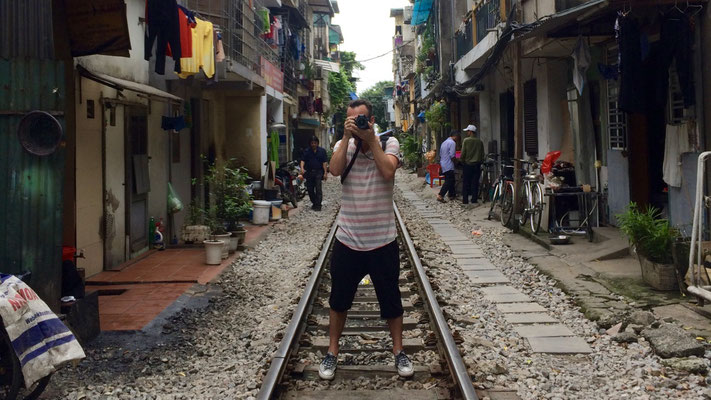 Check out the Long-Biên bridge next. Make sure to bring balls of steel when crossing this old thing. When the train is rushing over the bridge and you are standing on it - you get the construction is about to collapse any time. Still it is something you have to see.

Other quite cool spots to go in Hanoi are the Hoan Kim Lake, the Tran Quoc-Pagode and of course all kinds of markets and food stands you find all around town. 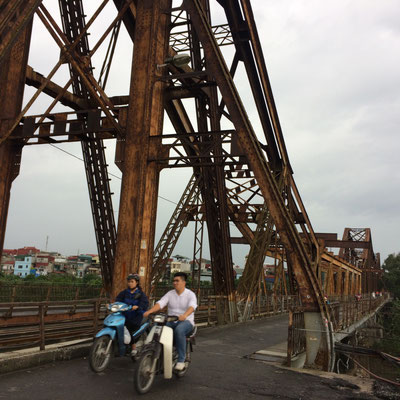 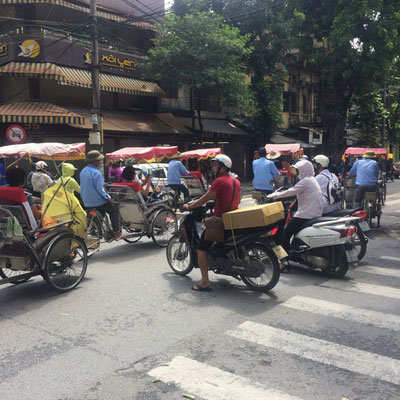 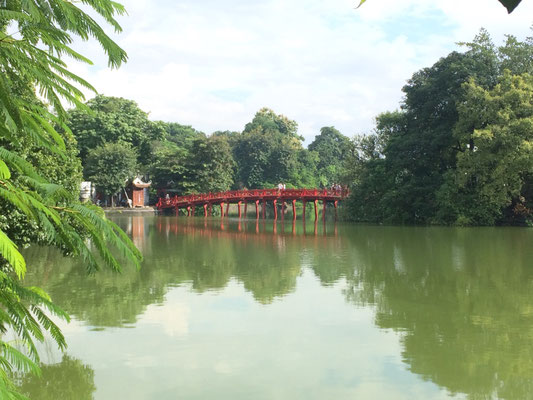 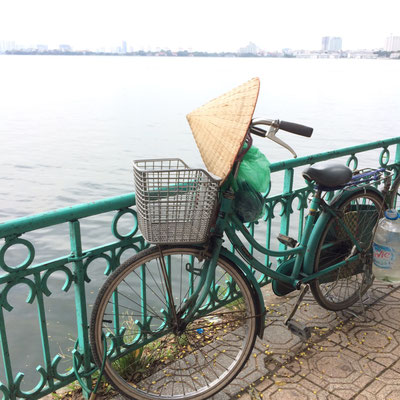 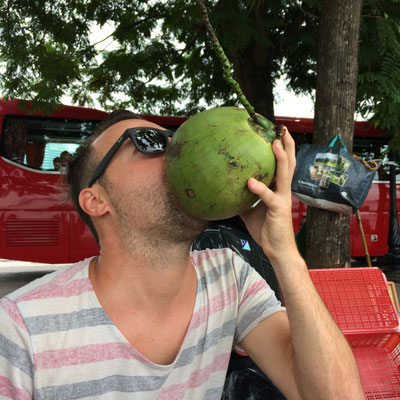 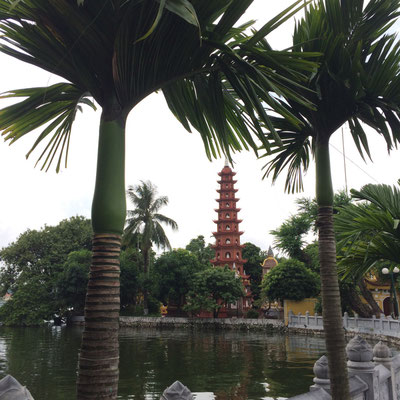 from hanoi to ho chi minh city by train & bus

I have to say I was never a big fan of train rides or train travels. This all changed when I went to Vietnam. Not only that the price for the trip through the whole country was about as expensive as a trip from Graz to Vienna in Austria you also get to see tons of cool stuff on the way.

So if you ever get the chance to go to Vietnam and you want to go from north to south - don't you even think on getting on a plane, the bus and train connections between the cities a perfect, so get your tickets and hop on. You can check and book pretty much all your Vietnam trips on the booking platform baolau.com no matter if you take the train or bus from A to B.

On the map you see the whole trip I did and if I remember right here are the prices (Prices in 2017) and durations between the cities.

So in total I paid less than 70 Euro for 1.700 kilometer train/bus trip. Yes Vietnam is cheap, it's so cheap that my average dinner was less than a Euro and the cheapest room with air con, wifi and a breakfast was 4 Euro. I sometimes even felt ashamed while paying so I just gave tons of tips which was rewarded with a big smile by lovely locals.

The province in the north of Vietnam is famous for a high density of natural attraction. I specially enjoyed the trips to the Cúc Phương National Park - Vietnams first ever National Park and my journey down the river in Tam Coc. This area really blew my mind. Take a boat trip on the Red River Delta and visit the flooded cave karst system and a whole flooded city. You might want to stay maximum for 2 nights. There area is beautiful but you'll be done in 24 hours. 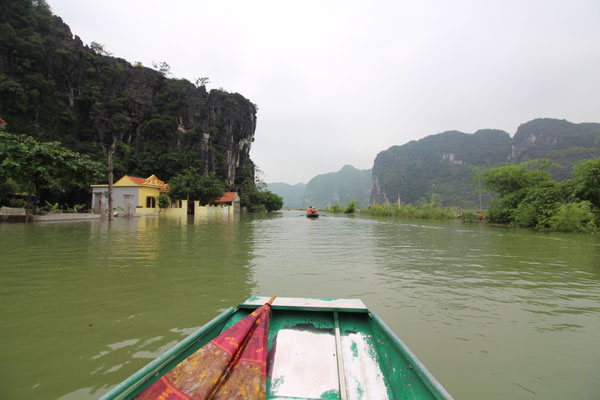 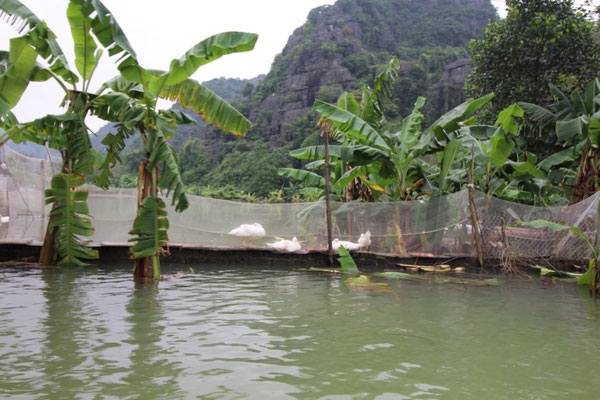 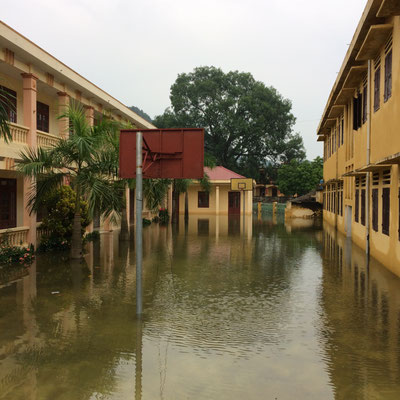 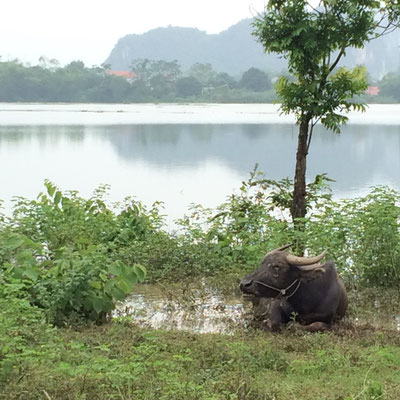 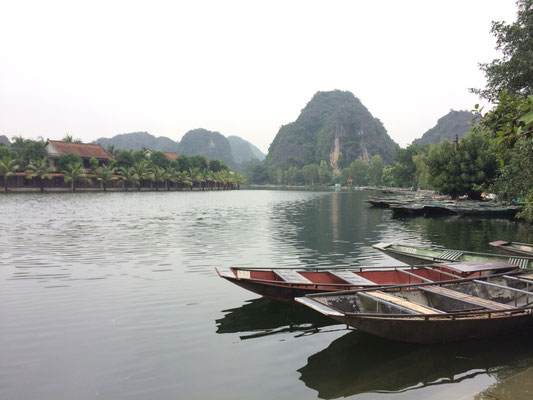 After a crazy night train ride (I didn't sleep at all, cause of the old vietnames guy snoring like a tractor) I arrived in city of Hue. The place is well known for its historic monuments which have earned it a place in the Unesco's World Heritage Sites.

The imperial city of Hue, which was the seat of the emperor between 1802 and 1945, is probably the heart of the city. The 2.5 square kilometer facility is located directly on the Hurong Giang (the Perfume River), which in my opinion does not live up to its name - holy crap. Unfortunately, the former seat of the Nguyen Dynasty was partially destroyed during the Vietnam War and never rebuilt.

Even if it's steaming hot, pack something to cover your shoulders and knees, otherwise you won't be able to enter the magnificent buildings. The fee was about 5 Euros back in 2017 - which is fair, I spent more than 3 hours in the forbidden city and still didn't see all the buildings. Make sure to also bring good walking shoes, sun protection and a lot of water. 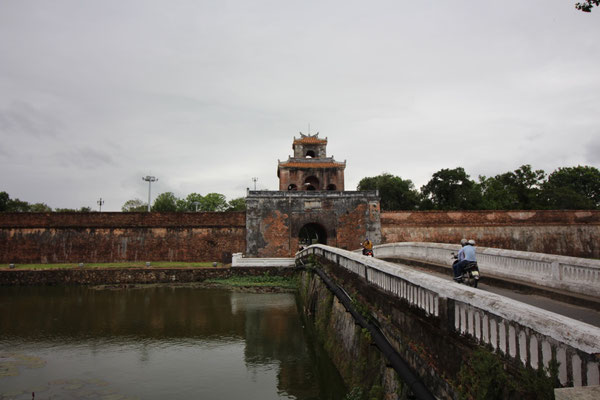 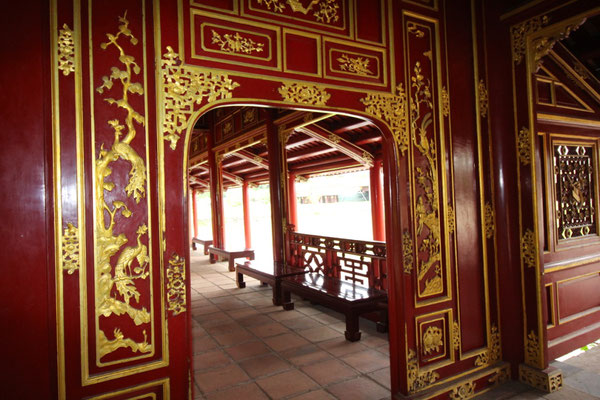 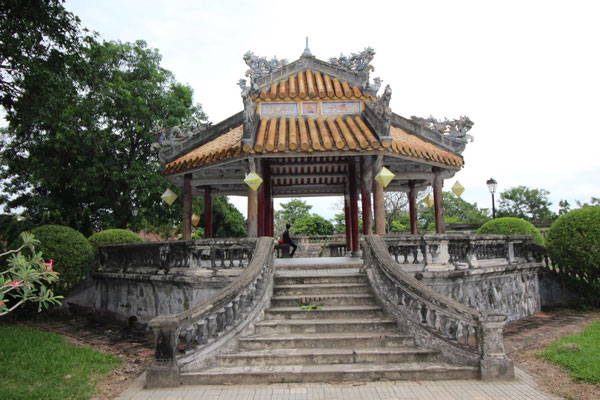 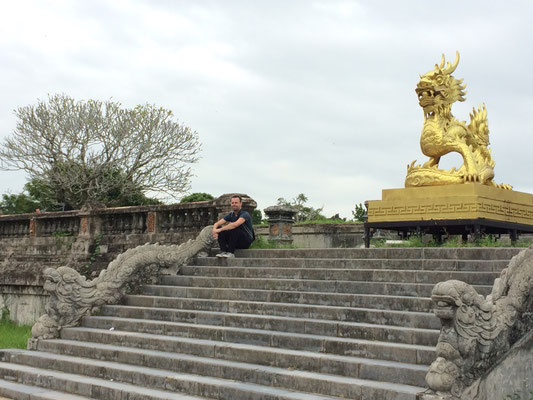 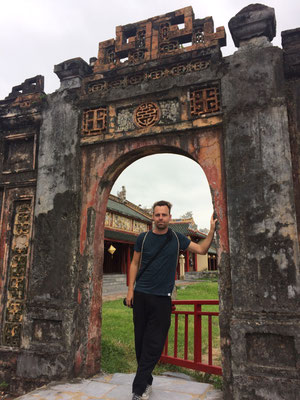 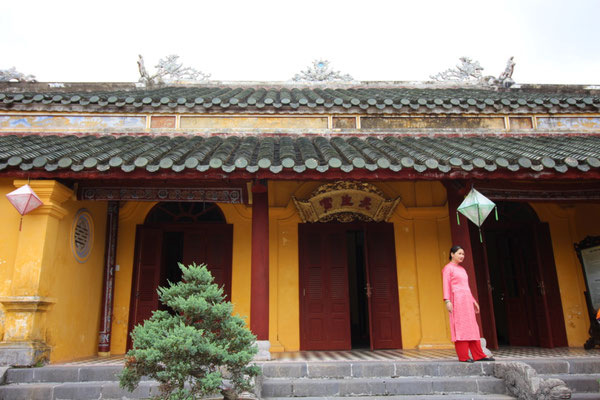 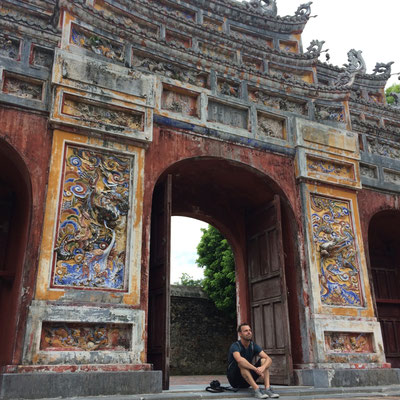 From a retro perspective and the things I know about Vietnam an Nha Trang now I would rather spent more time up north or go to Hoi An or Da Nang instead of going to Nha Trang. Although it is a nice city directly on the beach with a very nice promenade and some lovely restaurants it is run over by tourists. Don't get me wrong I know I'm a visitor too but those guys are just here to party hard and treat locals like shit. To be honest I didn't like it there at all. Rich Russians claim the bars and beaches for themselves and act like complete assholes. This is even going so far that already a lot of street signs are in cyrillic...I gave up the hotel 2 days earlier, which was not really a hard money impact, hopped on a bus and left this party town for some days at the beach.

After an easy 5 hour bus ride I reached my new hotel. Located on beach, I was ready for some chilling time way down south in Vietnam.

Mui Ne is a tiny coastal town living pretty much of fishing and tourism. There are some wonderful sand tunes not far from the beach where you can sand board or take some guided tours. I decided just to let loose and chill by the beach before heading further to Ho Chi Minh City or how the used to call it...Saigon. I basically just ate, drank and slept for 2 days straight.

Vietnamese food is crazy good - although I had troubles at the beginning of my trip to get something in my belly. There are a lot of places where they just let the meat hang out in the streets which is not the way I like to see my food before I hammer down something. Anyway you get used to it after a few days. Absolutely felt in love with the Pho which is a soup, perfect for hot weather, loved the Bun Ga and the Bun Bo - basically just noodles with vegetables and chicken, all perfect with an ice cold Tiger or Saigon beer. You'll be in heaven!

I thought I had experienced one of the craziest cities ever in Hanoi. Well, till that day, I haven't been to Ho Chi Minh City (Saigon) yet. The almost 9 million inhabitants, just as many scooters, the stuffy air, one street kitchen next to the other and crazy hustle and bustle around the clock make the former capital of the Republic of Vietnam a spectacular city experience. 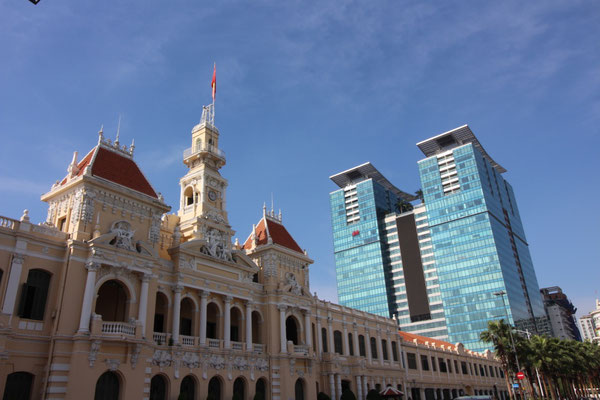 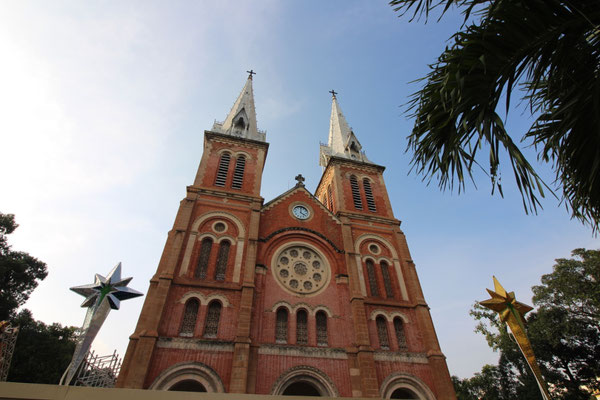 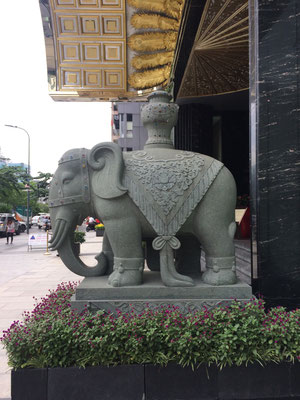 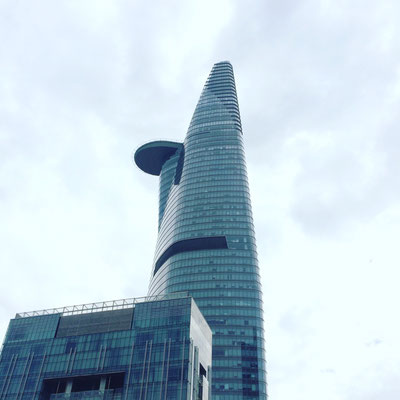 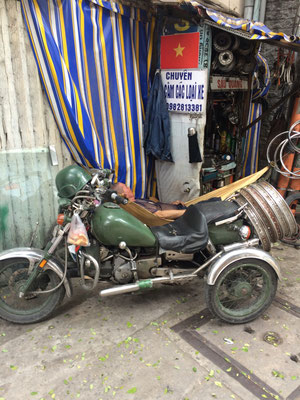 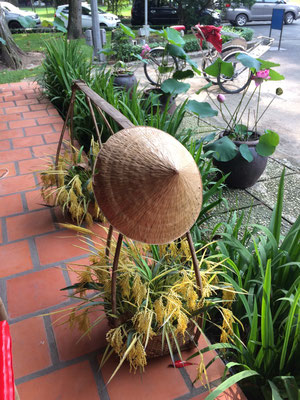 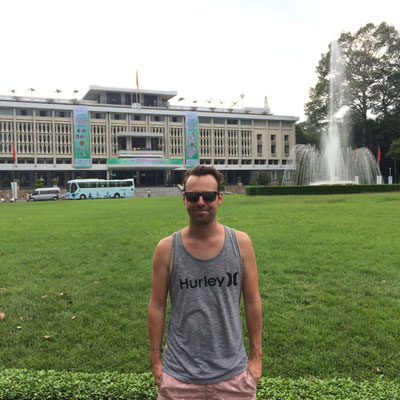 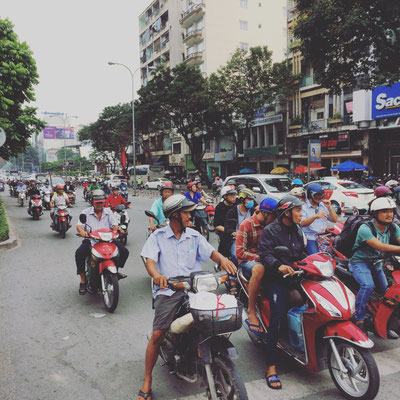 The inner city is beautiful and resembles a european modern capital. The further away you get from the center, the...let's say...more vietnamese the city becomes.

One of its highlights is the Cu Chi Tunnels. Here you can see the tunnels of the Vietnam warriors. So for everyone who wants to do AK47 shooting exercises this is the place to be. Well I skipped that one. I preferred to walk through the city center and admire the beautiful Notre-Dame Basilica and the huge Reunification Palace, continue to the 265 meter high Bitexco Financial Tower and back into the street food experience.

Vietnam - definitely a place that will see me again in a few years.

Comments: 0
About
Copyright © 2023- thisguyfromgraz.com - All Rights Reserved.
Log out | Edit